High Scardus trail transnational hiking connects the mountain ranges in the borderland of Albania, Macedonia, and Kosovo. Scardus name originates from the Latin name of the Sharri Mountains, the biggest massive in the region; Scardus or colorful mountain. In other words, the colorful is what the High Scardus trail is in terms of landscape, biodiversity, people, tradition, and food.

Furthermore, the multi-country trekking trail in the Balkan Borderlands region, with a total length of 495 km hiking path, covers the cross-border triangle trek between Albania, Kosovo, and North Macedonia and can be hiked in around 20 days. To sum up, the High Scardus trail passes through six nationals parks, one in Kosovo, two in North Macedonia, and three in Albania; so, one destination, three countries.

Above all, there are several connecting trails and exit points leading to populated areas, allowing for trips of different lengths, durations, and difficulty levels. Thus, the largest section of the trail, like 150 km, is on Albanian territory where it passes through the Sharri National Park so; Korab – Koritnik National Park known as the habitat of brown bears, wolves, foxes, and roe deer.

Sharri Mountains have a total area of 1600 km. Around 55% of that area is in North Macedonia, 44% in Kosovo, and 1% in Albania. During this trip, we mostly walk-in Kosovo. Meanwhile, we will cross the border two times. Also, make sure to have your passport in your bag. In addition, you send your copy of the passport when applying.

Accommodation (hotel & guesthouse) and meals as written in the daily itinerary; group airport transfer and other transports required by the itinerary; all entrance fees; skilled tour leader.

Day 2: A warm-up hike leads us to the pasture of Grama.

Day 3: Summit of Mount Korab, the highest peak in Albania.

Day 5: From Caja to the borderland of Kosovo.

Day 7: A day in Prizren! Take a walking tour of the historic city.

Scardus trip is rated as Moderate Plus and consists of a combination of moderate and more challenging hiking days. Similarly, trip members should be capable of hiking 5-7 hours a day on trails with steep ascents and descents and sometimes tough terrain. For instance, trails are often rocky and daily elevation gains and losses can range from 600 - 1000 m. We hike around 15 km per day during the adventure, much of which falls between 2,000-2,500'm of elevation.

Where is the starting point?

Most importantly to your enjoyment of the trip is your overall fitness level. In addition, we strongly recommend beginning a conditioning regimen at least 2-3 months prior to departure that includes hiking and/or walking in order to best prepare for this trip. However, the itinerary is subject to change due to your interests. You can start the tour from Skopje, from Prishtina, or from Tirana - depending on where you are landing off.

Feel free to give us a call at 00383 49 601 007 if you have any questions regarding the gear list. Likewise, we will also be happy to help you with itinerary questions. For more, email us, or check out TREK Faqs, which has great information to help you prepare for your trip.

And, the best time to do these trips is from the end of May till the beginning of October. 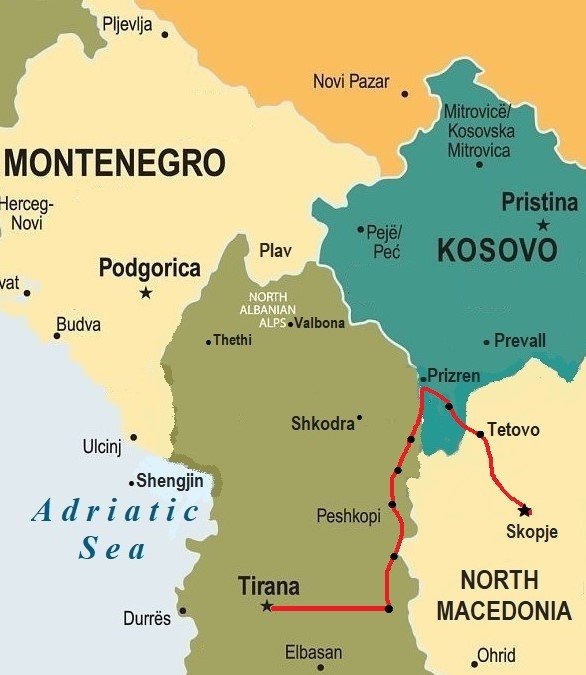 To get maximum comfort with minimum weight, the following checklist has been created to help you choose your clothing and gear for this trip. Try to keep the weight of your equipment to a minimum.

Albania has a high number of climatic regions for so small an area. Generally, experiences a Mediterranean climate with summer temperatures at 25ºC on average in the day, and the warmest months are July and August where temperatures can rise to 30ºC and above.

Kosovo has a largely Continental climate, although Pristina is considered an Oceanic climate. Generally, summers are long and dry, and winters are mild and rainy, with occasional heavy snowfall in the mountains. It can get surprisingly hot in summer, between May and August, with temperatures sometimes reaching as high as 32°C (90°F). The warmest month is July, with an average high temperature of 26°C (79°F). Winters are cold and snowfall is common. The coldest month is January, with an average low temperature of -5°C (23°F).

The unit of currency in Albania is the Lek (ALL). However, the Euro is accepted.

The unit of currency in Kosovo is the Euro.

The unit of currency in North Macedonia is Denar.However, the Euro is accepted.

Note: Buying Lek is possible only in Albania